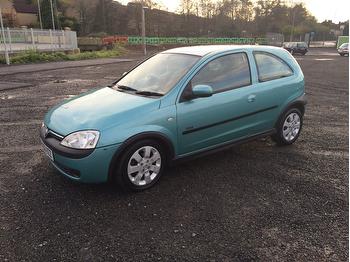 I’m in the market for a second car at the moment.  A classic Mini would be my preference, but that’s out of my price range at the moment, and after a lot of research I’m more or less settled on a Corsa 1.2 SXi.  I won’t bore you with the logic that’s led me to that particular choice.  Feel free to comment with your opinions anyway.

Anyway, today I went to see a Corsa that looked like it might be good, at a garage in Frome.  It turned out to be something of a disappointment.

According to their website they opened at 9am, so I rang at 9:15.  I’m pretty sure I woke the guy up.  He muttered various responses, some of which I had to ask him to repeat, but I eventually ascertained that the Corsa in question was still for sale, but wasn’t at his Frome branch because all his stock was in Radstock on Saturdays.  He gave me a postcode.

When I arrived at the postcode I found a garage, but with a completely different name, and no Corsa on the forecourt.  Confused, I gave the guy another call.  Apparently he was “round the back”.  Amid mounting concerns, I eventually found his ‘garage’ – a scruffy plot of untarmacked road with no signage and no office.  There were about 20 cars parked in the middle, right where the rain had collected in a large puddle, meaning that the majority of the cars were inaccessible.  The Corsa was right in the middle

Yep, that’s the Corsa in the middle.

.  He apologised a bit and said that his wife was driving down with a pair of wellies.  So I waited for about 15 minutes in the cold and wind.  This had better be worth it.

It wasn’t.  Once the car had been extracted and driven to a dry part of the wasteland, I had a good look round.  This is a quick summary of what I found:

In fairness, there were a few positives too:

It may not surprise you to learn that I did not buy this particular car.  I’ll keep looking.