After much dithering, I’ve taken the plunge and started glueing my styrofoam base together. There’s no going back now! I’ve also decided on a GWR colour scheme for the layout, and have started repainting some scenery in readiness. 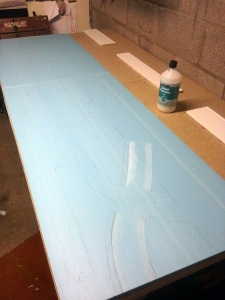 I’ve spent quite some time refining the styrofoam boards, adjusting them a millimetre at a time to ensure smooth gradients (as far as possible with my meagre skills). I’ve always seen these styrofoam boards as something of an experiment, since most people just mount their track directly to a smooth wooden surface. So it has taken some mental effort to persuade myself to remove all the track and actually stick it down. But it’s done. I bought a big tub of PVA glue, applied it neat to the areas that needed attaching, and fixed the blue sheets down. The layout is in a garage, which is cold this time of year, so it’ll take a while to dry. I’ll also need to go over some of the edges with some paper mache to hide the gaps.

Once that’s done, everything will need painting. I’m planning on basically covering the entire thing in a base coat of earth brown acrylic paint. The grass will need the brown underneath, the bare earth will be brown, and even the tarmac roads could easily be painted over brown. I’ve bought a couple of large tubes of acrylic paint to get me started on this job, and I’ll “borrow” my kids’ paint brushes.

Meanwhile, in the warm of my home, I’m sorting out some other details. I’ve been playing around with cardboard models, in an attempt to create my own custom-made buildings. So far, though, they look a little too cardboard, and I’m not entirely satisfied with the results. More practice is needed, methinks. In the meantime, I’ve had a go at repainting the buildings I’ve already got, to add a bit more detail and to establish a consistent colour scheme across the layout. I was originally planning on making up my own colour scheme, but for realism it’s probably safer to go with something that is already established, so I’ll be using the GWR colours this time – cream and light brown.

I already had a Hornby platform shelter from my previous layout, which came as a plain yellow plastic mold. Not exactly realistic. But with the application of a little acrylic paint in some strategic places, it’s come alive. You can see the before and after below. I’ve also repainted my old signal box, which was previously adorned with green details, and has now been GWRed. It’s still missing a staircase (no idea what happened to that), so I’ll have to make something if I’m going to keep it. 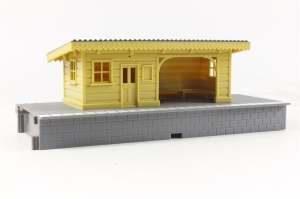 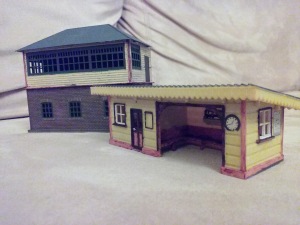