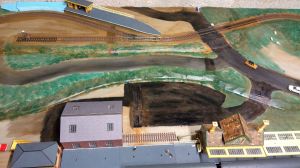 In my latest few trips to the garage I’ve been working some more on various aspects of the scenery. The roads have now been painted in (though still waiting for appropriate white lines), Backwoods Station now has a curvy extension on the end (still needs covering), I’ve created a custom backscene, I’ve used matches to create a walkway across the tracks by Frontington Station, and I’ve built a couple of kits I got for my birthday.

The backscenes were an interesting experiment. I spent some time looking online for some suitable landscape images that were free, and managed to find one of the right sort of geography. It was actually quite hard to find a suitable image, with the right perspective and focus and distance from the camera. Then it was just a case of popping it into a DTP program and printing it out. I’ve mounted it on some thin hardboard with watered down PVA; it looked a little bubbly and wrinkly to begin with, but once it dried it went nice and flat again. Some of the edges need re-glueing, but that’s no big problem. I think it really transforms the layout!

Backwoods Station was always going to be a challenge. It’s on a curve, and I like running my passenger train with two coaches, so it needs to follow the track around the curve a bit. And because it’s on the outside of a radius 1 curve, it actually ends up quite far from the rolling stock at times, but thankfully you’d never notice that from a typical viewing angle. For the extension itself I’ve used an offcut of the polystyrene board I used for the base. I’ll need to cover it in some paper or card, and I’ll probably cover the plastic platform too while I’m at it so it’s all consistent.

I decided I also needed a way for people to cross the track from Frontington Station to get to the engine shed, so I made a little wooden walkway. It’s a bit rough round the edges, and still needs painting to make it look less ‘new’, but it’ll do the job. It’s matchsticks chopped in half and glued straight onto the track, leaving enough room for wheels to still get past.

Then there are the model kits I got for my birthday, including a water tower and some level crossing gates. They’ve come out quite nicely, I think. I’ve also built a couple of scale cars from plastic kits.

All in all, some good progress on the scenery! I’ve also started making a concrete floor for the engine shed using some thick cardboard, and I’ll take some photos of that once it’s installed. I also need to take the plunge and do some ballasting. And, in a final bit of news, I’ve just bought myself a new loco – a BR black J72 tank engine by Bachmann! I’m looking forward to that arriving, and I’ll be sure to take some photos of that too.